The BNP and liberal angst 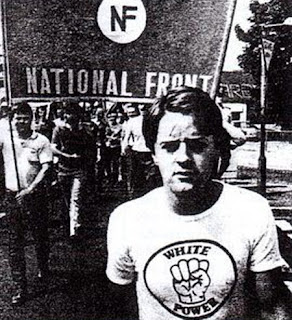 Apparently Nick Griffin wept when he addressed the fascist faithful following their capture of two seats in the European Parliament. Ah, the sentimentality that always accompanies brutality. I expect thoughts of his mother or the idea of harm coming to defenceless fluffy animals evokes a similar response in this vicious fuck. It's always with same with these gangster types, don't you find?

Another rather incongruous response is that from sections of the 'liberal-left' when confronted with this repulsive man and his fascist gang. Take the egg-pelting business. Just from the top of my head I can recall Michael Heseltine being sprayed with red paint; John Major being hit with an egg with such force it drew blood; Prescott having a bucket of water chucked over him by some one-hit wonders at the Brit Awards and then being hit with an egg on a later occasion; and most recently there was Mandelson having some green goo chucked over him.

Unremarkable, one would have thought, in a country that has a long tradition of dairy products and other sundry items being lobbed at the proud and the powerful - but when this happens to Griffin, all of a sudden it's an outrage, it's illegal, it's playing into the hands of the fascists, behaving like the fascists? This is ignorant, masochistic - and strangely fastidious, coming as it sometimes does from those who spend much of the rest of their time striking a Jacobinesque pose.

We see the same sort of thing in relation to the issue of BNP teachers. The NASWUT have called for the teaching profession to follow both the prison service and the police in banning members of the BNP from serving. Ed Balls is giving it serious consideration, apparently. Some fear this may cause the ceiling of our liberty to collapse. Brett, for example, asks, "Are civil liberties only for nice people?" Um, no - but joining a particular profession isn't the same thing as being a member of civil society. Anyway, BNP members are delinquent members of civil society and certainly are not suited to the teaching profession. Neil Robertson's post on LC is more intelligent but the thread below displays the same strange phenomenon - this solicitude for the civil liberties of fascists.

The proposal to ban the BNP is probably just a piece of political posturing and almost certainly a waste of time - a large hammer to crack an almost imperceptible nut. Apparently only around 13 teachers were found on the leaked BNP membership list - and I bet most of them were PE teachers.* But it would have been nice if the masochistic liberals could have spared a thought for the children. Would you be relaxed about a BNP member teaching your child history, perhaps covering the unpleasantness between 1939-45? If so, I would hazard a guess that your child is an imaginary one. As for myself, in the unlikely event that I discovered my corporeal child was being taught by a BNP member, I'd be up at the school gate with a basket of eggs.

*When I was at school, PE teachers were all fascists who enjoyed humiliating fat people. When I joined the profession, they'd transmogrified into caring, sharing 'pastoral care' teachers. Who do they think they're kidding? Nazis in highly-flammable clothing is what they are.
Posted by Shuggy at 11:03 PM