From the Daily Heil:

"Simmering tensions in the Cabinet were laid bare yesterday following extraordinary reports of a bust-up between Jack Straw and Ed Balls.

Downing Street issued a strong denial after being confronted with a torrid account of feuding ministers that fuelled persistent talk of discontent inside the Government.

I have to say that Jack Straw, what with his authoritarianism when he was Home Secretary, isn't my favourite politician but I have to say two things in his favour here:

1) Compared to what followed, we look back on our Jack's tenure in the Home Office as a halcyon liberal age.*

2) Punching Ed Balls strikes me as an excellent idea on a number of different levels.

My gripe would be that our Jack merely 'threatened' to punch Ed Balls and didn't follow through with such an eminently sensible policy idea. Such is the indecisiveness that palsies this administration. 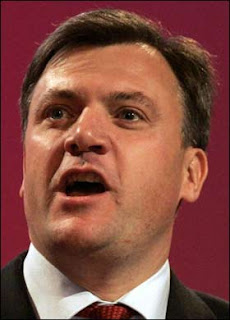 Ed Balls: a face you could never tire of punching

*David Blunkett an 'aberration'? I say he formed part of a trend, a pattern - what say you, Paulie?
Posted by Shuggy at 11:06 PM