George Galloway is a very sensitive man. I hope it isn't libellous to suggest perhaps a tad too sensitive? It's just that it is difficult to know what other conclusion one could draw from his apparent belief that a comment left on some stupid blog is so damaging to his reputation that it is worth £50k?

The whole thing is so ridiculous that one wonders if the whole thing isn't an elaborate spoof. But assuming it isn't, there is no alternative to backing David T on this one. For as Voltaire said: "You really can be something of an asshole at times - but I defend unto the death your right to be an asshole".

By pure co-incidence, around the same time, the carrier of the offending comment - the apparently unironically named 'Socialist Unity' blog - posted a video of Toube indulging in what they describe as an 'Islamophobic Rant'. Well, it was certainly a rant. But Islamophobic? Given that it is not only described thus without much in the way of evidence and that he is also accused of fuelling the 'growth in xenophobic hatred' in the text above the clip, I was wondering if Mr Toube might consider this libellous enough to take some action of his own?

If you're going to leave a comment, please check your bank balance before you do.

Actually, on second thoughts - no need to bother: I have comments moderation and a delete button that will take care of anything untoward. But take more care over at Socialist Unity. It seems they have no such facility. 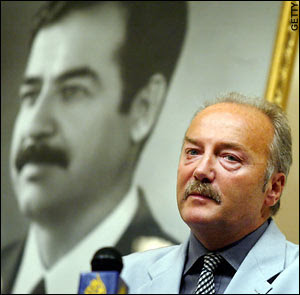 Galloway has always claimed he was addressing the Iraqi public rather than the leader, and that it was most infelicitous to use "you" instead of "youse" - Guardian, 2002.

That would render it, "Sir, I salute youse courage, youse strength, and youse indefatigability".

Which doesn't make any goddamn sense because 'youse' isn't used as the second person plural possessive.

I'm so confident on this point, I feel a Zen-like calm.

Although obviously it would be outrageous to suggest that Mr Galloway was lying. Given he has repeated this more than once, one can only conclude that he is genuinely linguistically-confused.
Posted by Shuggy at 6:51 PM