Do Labour supporters have reasons to be cheerful?

Because the Cameron effect does not appear to be all it was cracked up to be.

For one, the Tories' run of opinion poll leads are not anything like as large as those enjoyed by Labour from 1987 - and Major still won in 1992.

The other is that the 'Cameron effect' doesn't seem to be working on his own party quite as well as expected, as Max Hastings points out.

But there's another possibility, which Hastings - due to his rather obvious crush on Cameron - doesn't consider, which is that maybe Cameron himself is a bit crap.

You don't have to be Norman Tebbit to find all the posing with huskies and guff about 'sunshine winning the day' a bit embarrassing.

And while it may not be electorally wise to heed John Redwood's call for tax cuts, to advocate them is not in and of itself insane, as Hastings suggests. Anyway, how sensible was it to appoint John Redwood and expect him to say anything different?

And is it just Tory voters that need a reason to support Cameron's new model Tories? Hastings writes:

"Cameron knows that Britain is now a social democratic country. Only a catastrophe will make it anything else in the foreseeable future. He must adopt a social democratic agenda to win an election, and he will certainly lose it if he embraces an old Conservative one."

Is it? And does he? If the answer to these is yes, embracing the Cameron agenda may not be the solution for the Tories but the heart of their problem. Because they are not a social democratic party, they never will be and any attempt to make them seem so will appear fake to the electorate. Indeed if Hastings is right, the Conservative party has no reason to exist at all.

Finally - and this is a trivial point - but if Cameron is supposed to be so slick and media-savvy, why did he appoint George Osbourne as Shadow Chancellor? As well as being about fourteen and having about as much presence as an annoying poodle - the end of his nose, through no fault of his own, looks like a penis - and this can only become more defined with age. 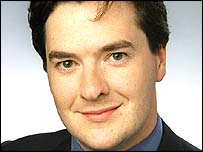 The photo doesn't bring it out too well - wait 'till the next time you see him on the telly, you'll see what I mean.
Posted by Shuggy at 11:49 PM