Veil wearing - for or against?

English readers may be unaware that Tommy's nickname is Mr Sensitivity.

And John Prescott is in favour too:

"Deputy Prime Minister John Prescott has defended the right of Muslim women to wear veils which cover their faces."

In the interests of equity, we would also like to point out that we support Mr Prescott's right to wear a veil too. 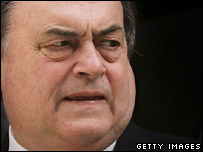