Against the Old Firm 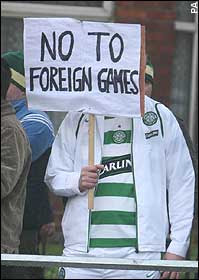 Here's a demonstrator complaining about the 'unacceptable normalisation' between London and Dublin. Something to do with a rugby game, apparently. Anyway, the diddy with the placard complaining about 'foreign games' is, as Mr Eugenides points out, wearing the full regalia of Glasgow Celtic.

[Glasgow, in case you were unaware - and you could be forgiven for being ignorant of this fact - is not part of Ireland.]

He's doing this because he's an idiot.

As are most Rangers supporters.

Back home - let me describe the situation here. You can get a staffroom full of teachers - you know, people who are supposed to have degrees and shit.

Some of them are monotheists that come from a rain-soaked country where people drink too much.

Then you go to a different type of school where they are monotheists who come from a rain-soaked country where people drink too much.

There's actually two countries involved here but it's easy to get confused because a) they're so fucking similar, b) the people who owe their allegiance to country A were actually born in country B.

As well as being monotheists who are drunk and wet - both groups are distinguished by having a fairly unsubtle view of history, to put it charitably.

Despite being to the outside observer so unbelievably similar, each group often refer to the other in suspicious tones as 'them'. In some cases they go as far as to limit our already limited gene-pool by declining social interaction with the Other.

That's why I hate the Old Firm.

If you are a Rangers or Celtic supporter, you may have been offended by this piece. Which is a good thing, in my view.
Posted by Shuggy at 8:32 PM

factoid: The city with the highest number of England shirts bought (per capita) during the last two world cups -- Glasgow.

I used to work in Govan, which is quite evenly divided between fans of either side of old firm (that tends to surprise people because of Ibrox stadium but Catholic immigrants were concentrated in the poorest parts of the city), and was quite depressed by the fact that half the folk I worked with backed Ireland and the other half supported England or Holland (Northern Ireland didn't make it). They were all from Glasgow.

Thank you for explaining all that Shuggy. Now I know. Rangers supporters are idiots and suspect Celtic are too.

One of the most positive days in our history, and THAT'S the only photo you and Mr. Eugenics can come up with? And you're wondering how this shit self-perpetuates?

And you're wondering how this shit self-perpetuates?

No, no I wasn't wondering how 'this shit self-perpetuates'. I know how it self-perpetuates and if you think it's because of a photo posted by two minor Scottish bloggers then you're capable of believing anything.

Of course the likelihood of seeing any members of either group of 'monotheists' actually involved in an act of worship to their Theo is vanishingly remote. Still they clearly like wearing badges, even if they don't know what they mean.

Christopher Brookmyre [a St Mirren supporter] has some good demolition jobs on the Old Firm, taking the same line [what country and what century do they think they're in?] in several of his books, see the glossary to "Etched In Blood And Hard Black Pencil" for example.

Any further East and you'd be a Geordie, SCWR.

Aye indeed, a pox on both their houses --it's bloody pathetic. Shades of the green and white chariot teams in Constantinople.

"factoid: The city with the highest number of England shirts bought (per capita) during the last two world cups -- Glasgow."

Well, to be fair, the shopping in Edinburgh is rubbish.

I didn't take any offense at the post, despite being a Rangers fan, because I know exactly the kind of neanderthals (on both sides) who do this kind of nonsense. For what it is worth, I'd rather self-immolate than put on an England shirt; but that is another unreasonable tribal bias, not this one.

The only good thing about having neds wandering around in such visible latter-day heraldry is that you can see them coming from a mile away and can choose to a) avoid them or b) put your foot on the accelerator.

"No one likes us, we don't care" we chant, but that hardly means we should try to be such obnoxious dicks.

despite being a Rangers fan

Sunderland. He could be one...

Can I just interrupt this little love-in to draw your attention to St Johnstone playing Motherwell in the SC quarters tonight.

Just for future reference, "Mr Eugenics" was my previous and, let it be said, much more controversial blog.

At work I once came across a colleague going through a large pile of job applications. He was putting them into two piles - to be looked at and to be binned.

On inspection, all the ones on one of the piles (it really doesn't matter which) were applications by people whose schools - from twenty years before, in some cases - had "Saint" someone or other in their names.

Those were the only ones he'd look at. Or possibly vice versa, I can't remember.

sorry to dissapoint you but that photo is a fake, check it out hhttp://blogorrah.com/protests/

Yeah,Shuggy,and how much of the same shite can you say about the old firm? You hate them? Hate is a bad thing, especially when it is applied in such simplistic terms. It'll make you ill. Some of us are capable of loving footie, having pals who support the opposing team, winding our pals up mirthfully, and remaining on very good terms. There are idiots in every walk of life, not just in people from Glasgow who happen to support the two major teams. And did you know that the darling Hoops support have won awards for being the cheeriest, albeit drunk, and lovable away support in the firmament?

My favourite was the bagpipe-playing, kilt-wearing Hungarian in the British Embassy in Budapest some seven years ago who once went to Glasgow, entered a pub, got drunk and came out a lifelong Partick Thistle supporter.

Which part of the Old Firm is Partick?

Which part of the Old Firm is Partick?