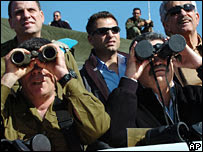 "Israeli newspapers have printed photos of Defence Minister Amir Peretz trying to watch military manoeuvres through binoculars with the lens caps still on.

Mr Peretz was inspecting troops in the Golan Heights with the Israeli army's new chief of staff, Gen Gabi Ashkenazi.

According to the photographer, Mr Peretz looked through the capped binoculars three times, nodding as Gen Ashkenazi explained what was in view.

Analysts say it is a new blow for the embattled defence minister."

With breathtaking insights like that, these 'analysts' are doing a superb job, I think you'll agree.

There are absolutely no prizes for guessing which politician is supposed to have done exactly the same thing.
Posted by Shuggy at 9:49 AM

That is really amazing. S'pose the shot was taken a microsecond before he realized and adjusted the matter.