At producing people that drink themselves to death:

"Fifteen of the 20 local authority areas with the highest alcohol-related male death rates were in Scotland, with Glasgow top of the league with 83.7 deaths per 100,000."

In contrast, Aberdeen is trailing behind badly with a paltry death-rate that is a mere sixth of what Glasgow's is.

Researchers speculated that there were two possible explanations for this pathetic performance:

a) Aberdonians are too mean to buy a round.

b) They have other distractions. 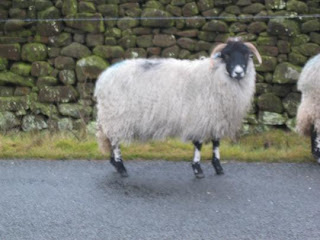 Talk about Aberdonians being cheap - that joke is really everything-must-go past-its-sell-by-date cheap.

I understand that short arms and deep pockets are quite common throughout Scotland. But surely sheep-shagging only generally happens in Wales?

I hope this doesn't offend anyone, by the way....

Aw, Paulie, must you complicate the narrative?

In Niddrie, you wouldn't have room for a sheep, would ewe?
http://strikethirteen.blogspot.com/2007/02/cheers.html

Nice pic. I've just done a piece on Culloden referring to these. Incidentally, Shuggy - do you follow the rugby, by any chance?

The joke was cheap, but it made me chortle.

Shuggy - you've been tagged at my site.