Actually working, would you believe? Amongst other things. Back later.
Posted by Shuggy at 3:02 PM No comments:

The IMF, shock therapy and Apartheid

Comment is premature, perhaps, because unlike Johann Hari, I haven't read Naomi Klien's "The Shock Doctrine" yet so I can't tell whether this following paragraph from his review is an accurate reflection of what she has written or if it is his elaboration of a thesis he is in fundamental agreement with. Regardless of which, the analysis of the 'shock doctrine' in relation to post-Apartheid South Africa was, well, pretty shocking:

"As the people of South Africa were fighting the last battles against Apartheid, the successor ANC was forced to haggle with the IMF and World Bank for their loans. The conditions? Ditch all the social protections included in your Freedom Charter, and leave the economic structures of Apartheid in place."

It was this last expression that annoyed me because I think it's intended to sound vaguely Marxist but it's anything but, as far as one can tell from the analysis put forth here. For instance, by the 'economic structures of Apartheid' do Klein/Hari mean simply capitalism? If so, there's two points here:

1) South Africa was certainly capitalist - and it also practiced Apartheid. But not only can the two not be fused together in this lazy-assed way, describing a basically capitalist system in this fashion ignores the manner in which Apartheid radically circumscribed two basic elements essential to the operation of any properly-functioning capitalist economy - trade and the free movement of labour. Any analysis of the collapse of apartheid should take surely take account of this? At least it should if it is an analysis that has any roots in Marxism.

2) A reading of the section of the Freedom Charter that deals with economics reveals an essentially Old Labourish, Clause Four sort of doctrine. The Soviet model, in other words. Post-apartheid it was obvious to anyone who had been paying attention that this was never going to serve as an economic model for the new South Africa. This, as anyone with any sense of economic history understands, was due to the (then very recent) collapse of the Soviet model.

It is certainly not my purpose to defend the IMF. The policy of 'shock therapy' fails to take account of an elementary fact of economic history, which is that the Western powers, whilst able to withstand the pressures of international competition as matured industrial economies, enjoyed a period of protection whilst they were still developing. But if neither Klein or Hari can rise above this lazy stuff about how sinister the IMF is with this vague yet all-inclusive condemnation of 'neo-liberalism', I was left wondering if Chris Dillow might have a point when he argued that this is the state the left gets itself into when it abandons Marxism. No alternatives, no understanding of capitalism as a system that governs the lives of both workers and bosses and politicians - just a vague lament that the reason Bad Things happen is because Bad People are in charge.
Posted by Shuggy at 4:25 PM No comments:

The trouble with King Gordon

I've been thinking that Gordon Brown's Scottishness is a problem - in a way that has nothing to do with the 'West Lothian Question'*. And before some nationalist accuses me of having the 'Scottish cultural cringe' allow me to qualify this: it has to do with him being Scottish Labour. This doesn't make him politically left, as his illiberalism, along with his apparent commitment to make our tax system even more regressive than it already is, demonstrate; it just makes him culturally Labour in a way Blair could never be. I'd argue that a number of his problems flow from this. Polly Toynbee, Jackie Ashley and the rest may love him for this but I don't think the electorate will.

For amongst the maladies of the political soul that commonly afflict the Scottish Labour beast are two that are potentially dangerous to the point of destruction for someone who aspires (although obviously not yet for bottle-boy) to win a General Election. These are: tribal partisanship and the assumption of something akin to the divine right of Kings - the working class serving as a secular proxy for God here.

I think most Scottish readers will recognise what I'm saying here. These two fuse together: demands for tribal loyalty are made on the assumption that only Labour serves the interests of the working class. Despite all the evidence that demonstrates that the Labour party do not, in fact, represent the interests of the working class, I really think the average Scottish Labour beast truly believes this because it has been repeated like a mantra for so long, passed down the generations, treated as an article of faith and has been woven into the collective psyche of the party.

So, for example, when a significant proportion of the real rather than imagined working class would rather have anyone but Labour running Scotland, even though a majority oppose independence, the Labour establishment are left adrift, confused, unable to form a decent response because they are still trying to work out what the hell went wrong.

This is the culture that Brown comes from and I think this forms part of the reason why he called-off the election and why he performed so badly against Cameron at the dispatch box. Despite knowing he would have won an election, his bottle still crashed. The reasons for this were obvious but what so few people have remarked upon is part of his nervousness would have been based on his inexperience with close elections. Where has he been confronted with this before personally? In Fife? Don't make me laugh. In a leadership contest? They had a coronation instead. It was no wonder Brown looked so pleased - it brought to the rest of the country the Scottish Labour way where the selectorate are the electorate in most places, most of the time.

When confronted with Cameron's jibes, Blair - who probably wouldn't have got himself in this situation in the first place - would have pretended to be enjoying himself and cracked a couple of jokes. Now, humour has a variety of social functions but one of them is simply to get others to like us. That Blair felt this need, I don't think many people doubt. Brown, on the other hand, can't do jokes. While being brought up in Kirkcaldy is enough to rob anyone of a sense of humour I don't think we can just blame his presbyterian background here: Brown gives the impression of someone who doesn't do jokes because he feels no need to ingratiate himself to others - and he feels no need to do this because he assumes he has inherited the right to rule. But he hasn't and if he doesn't get this soon, he's in serious trouble.

I'm not sure about his diagnosis, but I fear Anatole Kaletsky's prognosis might have been nearer the mark when he said this week's Autumn statement signals the beginning of the end of Gordon Brown's government. Political soothsaying is usually a mistake but there's just this vibe Brown gives off; an intangible, no doubt irrational, yet to me unmistakable feeling that the Force is not with this one.

*Why is it always raining in Harthill?
Posted by Shuggy at 7:50 PM No comments:

Arachnophobes, understand this: it isn't we non-sufferers don't sympathise with your problem (it's the scuttling - we know). Our hostility to your problem has nothing to do with its essential irrationality.

Rather it's the idea that it falls upon us to take on board sole responsibility for spider-removing duties. We object to this because while we don't leap onto chairs and shriek hysterically on the sight of one of our eight-legged friends, we don't exactly enjoy handling the little blighters, you know.

It's the scuttling, y'see. 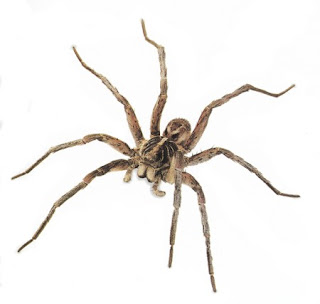 Would it be sexist to point out that it tends to be women who are disproportionately represented in the arachnophobe community? 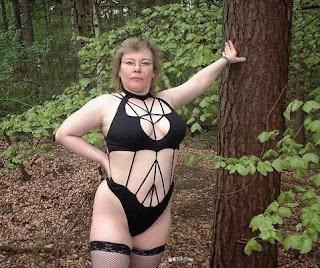 Although to universalise this generalisation would obviously be a mistake.
Posted by Shuggy at 9:54 PM No comments:

In touch with my female side

In my previous life, apparently. In fact I was female - most likely employed as "monk (nun), bee-keeper or lone gunman."

Via: Will
Posted by Shuggy at 1:53 PM No comments:

"Sainsbury’s is permitting Muslim checkout operators to refuse to handle customers’ alcohol purchases on religious grounds. It means other members of staff have to be called over to scan in wine and beer for them at the till."

One can only be impressed with people who refuse to do their job yet still get paid for it. If anyone's aware of a religion that proscribes dealing with obnoxious adolescents could they let me know and I'll sign up.
Posted by Shuggy at 10:25 PM No comments:

Whereas this movie, which I saw on duh-vuh-duh at the weekend, really isn't.

Based on a True Story (yeah, right) where idealistic teacher wins over disaffected class with her unorthodox methods and saint-like dedication. Gets resistance from cynics in bureaucracy who feel threatened - blah, blah.

Now I've ranted about these goddam Rambo movies for the Guardian reader before but there's a couple of other things I failed to rant about at the time:

1) Why are these inspirational types always bloody English teachers? The 'inspirational' method not suitable for trigonometry then?

2) Why do they only ever have one fucking class? Some of us have to work for a living, y'know?
Posted by Shuggy at 7:36 PM No comments: