On the Egyptian putsch

Following the ouster of Mohammed Morsi on Thursday there have been quite a few people who, without necessarily supporting the putsch, have helpfully pointed out that it takes more than 'mere elections' to make a democracy.  A list of features required to stop an elected politician dismantling democracy from within is often added to this uncontroversial observation, which include institutions that protect minority rights, an independent judiciary, a free media and so on.

There's nothing to disagree with there but in all the lists I've seen so far, there's a rather glaring omission: one characteristic of a country's government that hitherto has generally been considered essential for the proper functioning of anything that deserves the name 'democracy' is civilian control of the military.  That Egypt does not have this anymore is a point so obvious that one would not have thought it needed making, but apparently it does.  The constitution has been suspended, the elected president has been overthrown and put under arrest, as have the leadership of the party he represents.  Now some of those who have taken to the streets to protest about this have been shot dead.  It is naive in the extreme to claim that this does not constitute a coup simply because it was preceded by really big demonstrations. 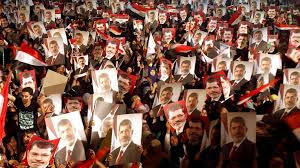 The ambivalence that some are clearly feeling with regards to Morsi's ouster obviously has to do with hostility to the nature of the Muslim Brotherhood.  It is a feeling I share but if one rejects the claims of 'democratic uniqueness' being made for this coup d'etat, there does not seem to be any reason to think this one will not end up like all the rest.

The observation that military governments have a tendency to degenerate into oppression and violence is a point that has been well-made in various places but another which could do with more emphasis is that, even if one can overlook the illegal and violent way they come to power, military regimes rarely achieve what they set out to do.  Try telling them in Pakistan that military government brings about stability - and try telling people just about anywhere that it is likely to deal with their Islamist problem.  In the case of Egypt it is unlikely to do so, not least because of the nature of Morsi's departure.  Elections alone don't make a democracy - but on the other hand, it doesn't do to understate their importance.  After all, the final test of whether elected politicians have succeeded in dismantling democracy from within is if it becomes clear that future competitive elections are impossible.  Egypt may have ended up like this but I don't think it is reasonable to suggest that it was far enough down that road to justify this 'intervention'.

As it is, Muslim Brotherhood supporters have seen their elected president ejected at gunpoint after only a year in office and in the future it is going to be rather more difficult to persuade them that democratic participation rather than violence is the best way to pursue their interests.  I wish opponents of political Islamism who have made vaguely supportive noises about this coup would realise something very important has been lost, which was the prospect of a religious government collapsing under the weight of its own incompetence and being rejected at the ballot box by the people they claimed to represent.  Instead, what has happened seems likely only to preserve and strengthen the narrative that it is external enemies and not their own internal problems that are behind the failure of political Islamism.