Ironically, PR is one area in which the performance of schools has unquestionably improved in recent years - except in this case, it would seem:

"Katharine Birbalsingh, who received a standing ovation for her attack on the “broken” education system, is being blamed for the sudden closure of the inner-city academy where she was deputy head.

St Michael and All Angels in Southwark, south London, has been declared “non-viable” after applications fell dramatically in the wake of Ms Birbalsingh’s remarks.

Canon Peter Clark, the chairman of the school’s governors, said that her attack on incapable teachers 'blinded by Leftist ideology' had dealt a fatal blow to the school. “The publicity that she generated was very unhelpful, which certainly didn’t help in terms of pupil recruitment,” said Canon Clark.

He added that an inspection of the school held shortly before Christmas had shown that “nothing that she said was right”."

School choice in action? Those who favour this should celebrate. Perfect competition requires, as every A Level economics student knows, perfect knowledge. Potential customers of St Michael and All Angels were able to obtain this from Ms Birbalsingh and also via the power of the blogosphere. If they'd read Mr Chalk, for example, they would have understood that, "[E]verything she says is completely true."

Rational utility-maximising education consumers have as a result taken their custom elsewhere - so an excellent result all round. There's no need to worry about Ms Birbalsingh finding another gig since we also know from her now defunct blog that she is a much better teacher than her colleagues on account of the fact that they are, for the most part, blinded by leftist ideology.
Posted by Shuggy at 2:02 AM 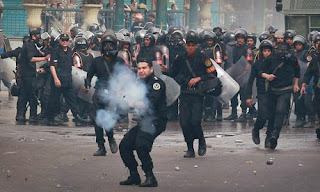 For those of us of a certain age, the comparison with what has happened in Tunisia and now Egypt prompts an immediate comparison: shades of 1989? The Berlin Wall wasn't so much knocked down but rather crumbled under its own weight.

The present situation feels like that; the sense that the game's up, the Emperor's in the buff, his bluff has been called and he'll sneak off on a plane like Ben-Ali before him to cover his nakedness. Hope so - but I'm concerned that people are forgetting the response of China to a similar insurrection.

There is a tendency to assume in a vaguely Marxist sense that there's something irresistible about revolution but arguably this is where Marx was at his least realistic. States, following the classic Weberian definition, are about claiming a monopoly over the legitimate use of violence - and given that they generally have the equipment to reinforce this belief, they cave in only if they are opposed by another state with superior firepower or if they themselves lose the resolve to use it. People power needs the ruling elite to lose its nerve in order to be successful.

This is indeed what happened with the USSR in 1989: a regime that had via glasnost delegitimized the means of its own survival and in any event gave the impression of being simply too exhausted to continue. The CPC, on the other hand, was not and was prepared to use any means necessary to crush the insurrection.

Egypt feels, smells, more like the former than the latter but I don't know enough about the situation to be confident. You'd think maybe the Americans getting off the fence very quickly might be an idea - but perhaps this would be futile. I'd imagine most Egyptians would view this as something of a death-bed conversion. It would be a difficult one for them to make, anyway. I think I'm right in saying that Egypt is in the top three recipients of military aid in the region along with Israel and Turkey. An investment that certainly is not enough to ensure the survival of the Mubarak regime - but the significance of this as a variable shouldn't be underestimated.
Wondering also whether for the second time in my life, academics of the social science fraternity will be left with very little to do other than shake their heads, trying to work out what they're for. Little Tunisia - who would have thought, eh?
Posted by Shuggy at 10:26 PM

Now there's always the possibility that someone will join the dots and I'll get into trouble for this but it's just too insane not to share. The following email regarding an erstwhile pupil has been forwarded to me. Names have been deleted to protect the guilty:

[From DHT in unspecified Glasgow school who is intelligent and reasonably effective but who has, sadly, clearly gone and lost her goddamn mind.]"

Given that one can experience exposure to this pupil during the course of one's working day for free, you think we should use our spare time to pay for this privilege why, exactly? The only plausible explanation I can come up with is because you are completely out of your gourd. 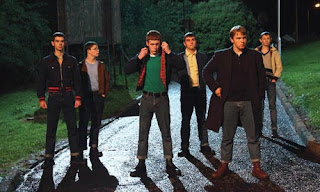 [NEDS: a film that I have absolutely no intention whatsoever of going to see. Likely to be popular amongst Guardian readers and other people who's lives are so comfortable, they feel the need to go out and purchase a little grit for recreation in order to feel more authentic.]
Posted by Shuggy at 7:22 PM

Taking a gap year expands the opportunities for being tedious

Liked David Mitchell's rather melancholy reflections on the whole business of students taking a 'gap-year' from their studies.

My reservations are slightly different. It is one of the top three experiences people have that seem to convince them they know more than they actually do. These are:

3) Doing some academic psychology but not enough to get you to the stage where you realise no-one knows anything.

Often people have more than one of these going on in their lives. This can be quite trying.
Posted by Shuggy at 11:10 PM

On the attempted assassination of Gabrielle Giffords

There is, as is the custom, the search for the wider implications of a tragic incident.

I'm neatly divided in two on this one. On one hand, one is very reluctant to implicate the Tea Party/Sarah Palin axis of small-government advocacy tipping into paranoia because you're aware that this follows a more general pattern of blaming a wider culture for the actions of individuals who may well be simply insane.

On the other, one wonders if there wasn't something in what Eric Hobsbawm said when he remarked that the social divisions that one sees in American society today are acute in a way that has not been since the post-Civil War period. You get the impression sometimes that partisanship has become so sharp that it threatens the legitimacy of decisions made by the various institutions of the republic, if those institutions don't yield the desirable result.

But you can take either of these interpretations and still come to the conclusion that throwing easy gun ownership into the mix is unlikely to help.
Posted by Shuggy at 9:06 PM

I think I'm getting a handle on this now. It goes something like this? To lose weight, overweight people should eat less (oops!) fewer pies - according to Prof McGlumpher, a nutrition expert at the University of the Useless and the Overpaid.

"Richard Thaler, a professor at Chicago University, suggests that groups of three or more should set up a tab to be split at the end of the evening to stop each member of a party feeling obligated to buy a round for everyone."

Three. He said a party of three or more. Only an American could think having three pints constitutes binge-drinking.

Did I mention he's a big influence on our Prime Minister?

Anyway, lemme try another one:

To avoid injury, people should not attempt to iron their clothes whilst still wearing them.

See, you were thinking of doing this but now you've been 'nudged' in the right direction. It's all very 'Big Society'. Think I'm getting the hang of it now. It's like the small society, only more stupid...
Posted by Shuggy at 12:06 AM

On going to live in George Monbiot's house

A number of commentators have, rightly in my view, ridiculed George Monbiot's plan to tax my mum for having excess capacity in her house unless she takes in lodgers:

"The next step is to reverse the UK's daft fiscal incentive to under-occupy your home. If you live by yourself, regardless of the size of your property, you get a 25% council tax discount. The rest of us, in other words, subsidise wealthy single people who want to keep their spare rooms empty. Those who use more than their fair share should pay for the privilege, with a big tax penalty for under-occupation. If it prompts them either to take in a lodger or to move into a smaller home in a lower tax band, so much the better.

If under-occupation is a symptom, rather than a cause, of inequality - why not suggest sensible ways in which the latter can be dealt with? But it isn't even that all the time. Monbiot takes one of the obvious injustices of the council tax system - taking house size as a proxy for wealth - and not only endorses it but suggests it should be reinforced. Anyone with even a passing acquaintance of the real world could come up with numerous examples of where under-occupancy does not correspond to increased wealth. My mum's case is unlikely to be unusual; 'under-occupation' here is partly as a result of one wage-earner now being pan-breed. She does have a widow's pension, to be fair - but I doubt it matches what Moonbat earns writing shite for Guardian.co.uk. Anyway - and I appreciate some might find this an unsettlingly rightwing argument - the house isn't part of some 'common stock'; it is hers because she bought it.
But I'm also intrigued by the way Monbiot seems to have adopted the sort of economistic reduction so beloved of the Tories when they're talking pants about marriage and the levels of welfare benefits. They think having the 'incentive' of a few measly extra quid makes couples split up. Now Monbiot thinks getting a 25% reduction in your council tax means people turf out flatmates/partners/offspring? I wouldn't mind so much but the figures don't even add up. Two earners split council tax, they separate, both now pay 75% meaning they are now paying 50% more for local... Oh, what's the point? I'm personally incensed by a greater injustice in the world: Monbiot makes arguments that he admits he can "find no research or figures either to support or disprove" them; I do exactly the same thing on this blog - then when I've done that, I have to go and work for a living. It's so unfair!
Posted by Shuggy at 9:43 PM