Alex Massie was surely right to say that George Osborne's ruling out of a currency union with the rUK would polarise the debate?  Hardcore Nats would become even more inclined to accuse their opponents of treachery than they already are whereas the unionists would be increasingly convinced that Salmond and the SNP are a bunch of dangerous lunatics.  This has certainly been my experience.  On seeing Salmond's address to 'business leaders' in Scotland where he went all Obama, I genuinely wondered if he wasn't losing the plot.    "Yes we can!", he said.  Yes we can what?  As an independent country of around 5 million people impose on 55 million people a currency union, even if they don't believe it to be in their interests? "Man's lost his damn mind", I thought - yet the response, depending on whose interpretation of opinion polls you believe, is a slight boost to the Yessers.

Whenever anyone points out the obvious problems with King Eck and his back of a fag-packet plans, nationalists frequently say that the Yes Scotland campaign is not about Alex Salmond.  This is technically true in that not all nationalists are SNP.  But the question remains: why then are so many of them prepared to defend his strange contortions over the issue of currency?  We should be clear that a currency union would not mean full independence.  The SNP's ideas lacked credibility anyway, as if you can pull a few fiscal and monetary levers and - hey presto! - you have a Scandinavian social democracy.  Salmondites have too much faith in government for my liking but the point is that under 'plan A' Scotland wouldn't even have control of these 'levers'.

This story in the Scotsman today is, I suppose, a logical extension of Salmond's weird notion that the government of the putative rUK would in some way obliged to agree with the opinions of his 'Fiscal Commission'*.


"In the event of Scottish independence, people in England, Wales and Northern Ireland should not be given a formal say on whether Scotland enters a currency union with them, according to First Minister Alex Salmond."

Here's something else we should be clear about: a currency union would require both parties to cede some of their sovereignty, as the governor of the Bank of England said. You might ask why English, Welsh or Northern Irish voters would agree to surrendering this to a country that has just rejected them but Salmond is clear that it is not necessary to ask them.  It also might be worth pointing out that any set of rules for a sterling zone that limited government borrowing and so on would be something that George Osborne would not be able to operate within at the moment.  No matter, according to the Nats - he doesn't get a say in this.

There is an honest case to be made for Scottish Independence but it is certainly not being made by the Yes campaign.  As it is, the 'debate' is becoming an increasingly futile and angry one because it is being conducted, not between nationalists and unionists, but between those who know what 'independence' means and those who do not.  The twist Salmond has introduced is that there is also a distinction to be made between people who are entitled to it.

Posted by Shuggy at 7:42 PM No comments:

The Madness of King Alex

In the event of a Yes vote in September, I've favoured a currency union with the rest of the UK for three reasons, two of them (or all three, depending on your point of view) for entirely selfish reasons:

a) Saying a currency union 'would work' is not the same as saying that it carries no risks nor that it would work better than the system we presently have.  The answer to these points is that it would and it wouldn't respectively, Rather it would be the least bad option because while it carries risks, these would be borne disproportionately by the rest of the UK and not Scotland.  This is congenial to me because I live in Scotland.

b) If Scotland launched its own currency, it would undoubtedly see an increase in the cost of borrowing - to a degree that is unpredictable if  the (admittedly extremely unlikely) event that King Eck carried out his lunatic threat to walk away on Scotland's share of the national debt.  I don't like this idea because I have a mortgage and credit cards.

c) Currency union is the option post-Yes vote that looks the least like actual independence and I don't believe in independence.  I'd put it more bluntly: if Scotland and the rest of the UK agreed a currency union, Scotland wouldn't really be independent.

This is me.  Why others should favour it is more of a mystery.  Two groups within the British Isles spring to mind:

1) Scottish Nationalists.  At this moment in time their behaviour is tending to reinforce the impression I've always had; there's a fair chunk of the SNP high command that don't really believe in independence.  How else can we explain their behaviour in the last few days?  We should be clear about this: the 'threat' by George Osborne can only be considered a 'scare-tactic' to the extent that, not 'the peepul', but the nationalists are scared of what independence means.  Currency union was the flagship of the 'independence by stealth' campaign.  Vote independence and you'll hardly notice the difference.  This has been holed below the water-line, hence the rage and the pathetic accusations of 'bullying'. 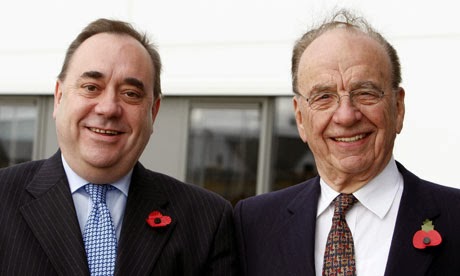 2) The rest of the UK.  It has repeated endlessly, apparently to no avail, that a currency union requires the agreement of both parties involved.  The truism that nationalists care about no country other than their own is illustrated in this case.  Is it not significant that at no point have the nationalist even given the faintest clue that they realise the rest of the UK needs to be persuaded to join this arrangement?  The madness of Salmond and the SNP lies not in their economic analysis but in the assumption that everyone else is under some kind of obligation to agree with it.  Even if they were so inclined, I'm not sure they could persuade anyone.  It's not just the fact that the rest of the UK would be obliged to bail out Scotland but Scotland would never be able to reciprocate - there's also the political dimension.  Mark Carney clearly said that a monetary union would require both parties to surrender some of their sovereignty.  It was all text-book 'optimal currency area' stuff but the nationalists missed the both parties bit.  One wonders if any nationalist could tell me how a democratically elected English or Welsh politician would be able to sell the idea that the rest of the UK should surrender a part of their sovereignty to a country that has just rejected them?  Because in the unlikely event that they were so disposed, the most recent evidence would suggest that they would receive a hostile reception.

In defence of negativity

There's something of a consensus emerging on both sides of  the referendum debate and it is that the No campaign is far too negative.  Take the Scottish liberal Tory Alex Massie for example:


"I have plenty of issues with the Yes campaign and the SNP and they offer us plenty of guff too but at least their imbecilities, most of the time, look to a sunny future rather than endless drizzle.

I know what he means - there is a catastrophising* tendency in the No camp that is undoubtedly counter-productive but a certain amount of negativity is unavoidable if one is to do justice to the situation. My own 'vision' of a Scotland in the Union is positive for me. I like Britain. The Union that the Nationalists despise so much is what made me. I am its very incarnation. I like to visit England to see my family and friends, going somewhere that is very different and yet somehow the same. I have a strong affection for what is familiar - but I can't reasonably expect to sell this to someone else. How am I supposed to compete with people who think that when Scotland is independent we will have Scandinavian public services alongside American levels of taxation and we'll all hold hands and celebrate the gorgeous mosaic of our diversity - because xenophobia is an English problem, don't you know?

A 'sunny future' indeed but I'm afraid I'm not happy with this demand to be all upbeat and positive.  Why should I be?  I'm not an American.  Whether literally or metaphorically it's going to continue to rain a great deal in Scotland after September 2014 and if it's considered 'fear-mongering' to point out that there's no pot of gold at the end of the constitutional rainbow then that's just too bad.  I would even take the negativity a stage further and state my concern that there are now no good outcomes to be had from Referendum 2014 because it is impossible for it to yield a result that people will be happy with.  One of the reasons for this is an intrinsic problem with referendums; they are usually sold as a mechanism for dealing with an issue 'once and for all' yet this is exactly what they don't do.  It has rightly been argued that one of the reasons the Yes side may still win in September is their committed army of  foot-soldiers.  Labourish Scotland has only woken up to the real possibility of independence since 2011 and are struggling as they are competing with believers who have been preparing for this their whole lives.

What happens to the soldiers on the losing side when the war ends is a question that has been asked too infrequently in history.  If Scotland votes no, are they going to accept defeat, admit it was a fair fight and just go home?  I thought the most likely outcome from a No was some kind of evolving 'devo-max' compromise where we ran the risk of becoming as tedious as Belgium.  A Yes vote wouldn't have looked that different.  For the hardline Nats, an independent Scotland would be neither independent nor Scottish enough.  When are we getting rid of the Queen, why are we in the Sterling zone?   George Osborne's intervention ruling out currency union is a 'game-changer' in some senses yet in other ways not.  I'll leave it to others who know a lot more about economics to discuss the details but as far as I can judge, an independent Scotland launching its own currency, possibly pegged to the pound or the Euro, is now the least mental option.  This would carry risks obviously and certainly produce higher borrowing costs.  If  I were a nationalist, I would prefer this to a Sterling currency union because the latter would mean Scotland wasn't really independent at all.  But something that you might think should be an option that people who really believe in independence would favour is as I write being presented as an outcome of 'bullying'.  It is for this reason my answer to the nationalists' question "What are you afraid of?" is that I fear this will not end well - because I'm afraid this might never be a settled issue.  It certainly won't be by September 2014.

*Note: The way Western political discourse slips into the language of the apocalypse is something I've always assumed comes from Christian eschatology and have tried to correct it in myself accordingly.  But there's always a nagging doubt: we don't know exactly what happened in Pompeii because by definition no-one survived to tell the tale but there must have been at least one person who said "Ach, it'll be fine" who won the argument...