Via the power of Facebook, I came across this post arguing that there's something about Gove that makes otherwise sensible people lose their goddamn minds:


"What is it about Gove that bends even sensible minds out of joint; that drives intelligent people absolutely batty with rage?"

Well, there's some fairly obvious aesthetic reasons - and for my part there's a certain amount of hostility borne from the fact that Gove and his fans persist on labelling those of us who do this job and have the temerity to join trades unions as the enemies of progress, whereas government ministers and departments are entirely altruistic, motivated by a concern for the Common Weal. (People who believe that are capable of believing anything - but that doesn't mean it isn't annoying.)  But beyond that, it's difficult to say. The feeling of extreme hostility isn't one I share, and neither do most of my colleagues. We're watching with interest what is happening south of the border. Some of what Gove proposes is entirely uncontroversial from a Scottish perspective, such as having a single exam board and a core set of subjects. Most of us have at least some sympathy for the idea that it is the purpose of the teacher to impart knowledge, rather than this emphasis on skills.

However, other aspects - if they've been reported accurately, and I appreciate this is a big 'if' - strike one as antediluvian and absurd, like the idea that primary children should be learning ancient Greek or force-fed Dickens. As for this notion that 'faith schools' produce better results? I often think there's very few arguments about education that couldn't be settled by a visit to the east end of Glasgow by some of these people who bring to their keyboards a wealth of opinion combined with a poverty of experience.

But my plea is this: if I wanted to learn more about what is going on in the education system in England, where should I look? Because I am clearly wasting my time reading the sort of posts and articles that I come across on a daily basis. Take the one above. I dare say anti-Gove comment isn't entirely rational but that coming from his supporters strikes me as being the flip-side of a coin that has very little acquaintance with what's actually going on in education in England. Or if it does, they're keeping it a secret. Gove is 'getting things done', we're told - without any analysis of what, exactly, he's doing, or why the author thinks this is a good idea. Without immersing myself in the details, the obvious characteristic of Gove's tenure as Education Secretary is what I've decided to call 'partisan centralism'. Would anyone argue with this description? It's certainly partisan, as his recent comments show - and it's centralised nature can be clearly seen in the way Gove and others have an opinion, and give direction, about every aspect of education: the content of the curriculum - subject by subject, what pupils wear, how teachers arrange the furniture in their rooms, the method by which those of primary age learn to read and so on.

Rather, the question is, why does anyone think this is a good way of running anything? The author of the post above dismisses as absurd the notion that there's something 'Bolshevik' about this - but it strikes the outside observer as a tad Soviet. Try a thought experiment: let's assume Gove is absolutely right about everything. (Bear with me...) In trying to implement a series of education reforms that were the very incarnation of this rightness, one is sure to encounter problems in the execution, given the scale and complexity of the project undertaken. To overcome these, one might want to seek the advice of those acquainted with these predictable difficulties. Now who among these is Gove or anyone at the Department of Education inclined to listen to? Teachers, civil servants, local government? Already dismissed as irrelevant - but here's where everyone, critics and fans, are missing the crucial point: irrelevant because all that matters now is the survival of these reforms as a political project, such is the nature of partisan centralism.  It is for this reason I'll predict that in ten or twenty years from now, you'll get the same complaints about education going to hell on a hand-cart.

Update: Gove making my point for me more perfectly than I could have imagined.  'Gove is getting things done', except by adopting the 'let's lose friends and alienate absolutely everyone we might depend on to implement our favoured reforms to prove how macho we are', it turns out that in fact he isn't getting things done at all.  The irony is the idea of having a core curriculum is a good one, IMHO.  Shame about the belligerent ideologues who have been 'tasked' with its implementation.

On June 22nd, 1941 Germany launched the largest land invasion in the history of warfare.  Around three million Wehrmacht troops, along with a further million from the other Axis powers, crossed the border into the Soviet Union.  Few invading armies in history have enjoyed the advantages they did.  Stalin initially refused to believe it was happening - then once the reality was unavoidable he acted, according to the contemporary sources, like the proverbial rabbit caught in the headlights.  Among the consequences of this initial inaction was the destruction of large swathes of the Soviet air force before they had even got off the ground.


Anthony Beevor's description of the initial stages of the campaign has an eerie quality to it - the way the soldiers of the invading army oscillated between euphoria and fear.  The Wehrmacht had made astonishing territorial gains, yet the landscape seemed limitless like the ocean.  They had killed two million Red army soldier in the first few months of Barbarossa yet still they came.  And they came with a ferocity that the Germans were not quite prepared for.  Two things struck the invaders: the indifference the Soviet commanders showed to casualties among their own forces and the extent to which the Red Army soldiers were prepared to fight long past the point at which the Americans or the British would have surrendered.  One should not imagine this was solely on account of the brutality of the Soviet military command, although this was undoubtedly a factor.  Greater was the urge to defend the Motherland along with expectation of the likely outcome  in the event of surrender.  The latter was entirely rational: over five and a half million Russians were taken prisoner of war in the Second World War; only two million of them survived this experience.

'Barbarossa relauched' centred around the city of Stalingrad.  Hitler became obsessed with its downfall, having convinced himself it was key to his Eastern campaign.  It would give him access to the oil-fields in the Caucuses and the downfall of the city that had taken its name from the Russian dictator would deal the forces of Bolshevism a psychological blow from which they would be unable to recover. 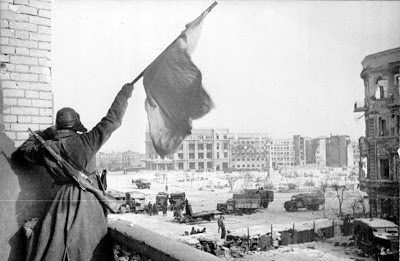 As it turned out, in its hubris it was the ambition of the Third Reich that never recovered from their defeat at Stalingrad.  In just about every detail of the campaign, the grotesque vainglory of the Nazi regime was exposed.  Troops lacked the necessary winter kit they needed for the cruel Russian winter because it was assumed that it would be over before any such thing was required.  On hearing that the Russians were out-matching the Germans in the production of tanks, Hitler banged his fists on the table in disbelief.  The 6th army could have broken out of their encirclement in Operation Uranus had it not been for Hitler's insistence that they hold their position whatever the cost.  Goering had claimed the Luftwaffe could air-drop the necessary provisions but in reality the troops were now receiving a third of the rations they required.

By January, half-starved, having already killed all the horses, the 6th army was at the point of surrender.  It would almost be possible to feel sorry for them - had it not been for the fact that they had unleashed barbarism across an entire continent.


Hitler rejected Paulus's request to capitulate, believing that as a matter of honour the commander of the 6th army  should die fighting or take his own life, since no German Field Marshall had ever been taken prisoner.  Instead he surrendered and the German 6th army was formally defeated on the 2nd of February,  1943.

Stalingrad was won at enormous human cost and was witness to acts of unbelievable barbarity but also to extraordinary feats of endurance and bravery.  One can only hope those proponents of a peculiarly vulgar species of the totalitarian thesis do not really mean what they say when they claim there was nothing to choose between Stalinism and National Socialism; in order to be consistent, they would have to say plainly that the outcome of this battle was of little consequence in world history.  For the rest of us it was on this day seventy years ago that marks the beginning of the end of the most brutal and degraded regime in human history.  The duty the living owe to the fallen is to remember them.