From the Herald on the Scottish Government's proposed 'anti-sectarianism' laws:

"The estimated costs of introducing new laws targeting hate crime at football matches are "way off the mark", according to a leading police chief."

Yeah, but suggesting that the problem with the proposed legislation is the cost is a criticism that rather misses the target as well.

The problem with this proposed legislation is that it is stupid, illiberal and unjust. Kick someone's head in and you'll get eighteen months, if the judge was feeling particularly strict; say you're going to kick someone's head in because they're an Orange/Fenian bastard and you could get five years in the 'New Scotland'. Actually, seems you don't even need to go that far:

"Football supporters could be jailed for singing God Save the Queen or Flower of Scotland under the SNP's new law to crack down on sectarianism.

Making the sign of the cross or singing Rule Britannia could also be regarded as an offence under certain circumstances once the legislation comes into force next football season.

Community safety minister Roseanna Cunningham yesterday said that such songs and gestures could be regarded as offensive acts when she was questioned about the SNP's anti-sectarian bill being fast-tracked through parliament."

Community safety minister? Jesus wept! But the purpose of this is not to make an easy point about free speech; support this and you obviously don't believe in it - period. But if it wasn't this it would be something else, will be something else, just as stupid and illiberal in a constitutional framework where a voting system that was supposed to avoid overall majorities has delivered one in a unicameral system with no revising second chamber.

The other point is, why has our new strident majority government opted to make a priority of this and excessive drinking? For these are both problems that almost everyone agrees are Bad Things yet at the same time are features of Scottish life where it is doubtful that government has the ability to change without very drastic measures.

I would doubt, for example, that Salmond & Co would go ahead with restrictions on alcohol consumption of Scandinavian proportions. As for sectarianism, it is in any event a much-exaggerated problem. Glasgow 'Belfast without the guns'? Please don't be mislead; the sort of people who say this are exactly the same kind of people who describe only moderately authoritarian politicians as 'Nazis'. But in as far as it is a problem, we already know the Nationalists are unwilling to countenance measures that might actually do some good - such as eliminating religion from schools.

So what are the SNP playing at? I have to confess, I don't know but it seems to me that they're behaving like Blair did when he was first elected; huge majority yet still falling into the opposition default? Or in the case of Salmond, like he's still in minority government. Or maybe he's playing the long-game, avoiding controversial issues like the local income tax and keeping his powder dry for the forth-coming constitutional confrontation? But whatever happens, one is beginning to suspect that in the 'New Scotland' being Scottish will be elevated as a virtue above boring conventions such as the independence of the judiciary or legislative scrutiny.
Posted by Shuggy at 12:34 AM

It's a dispiriting time to be a teacher in Scotland at the moment. CoSLA, the umbrella group that represents the local authorities who employ those of us who work in the state sector, are engaged in a concerted onslaught on teachers' pay and conditions. That some of the changes to the latter will not save local government a red cent rather reinforces the impression that budgetary restraints are simply being used as a cover for teacher-bashing.

Meanwhile, 'union militancy' is, sadly, in rather short supply. The main teachers' union rather gives the impression of having completely lost sight of whose interests they are supposed to be defending. Being not very good at one's job is one thing but one really does despair when we are being represented by people who don't even appear to know what their job is.

Represented by people who don't know what their job is and working for people who don't know what my job is; CoSLA explicitly state here (p 12) that they do not consider that the main job of a teacher is to teach children. It's grim stuff, which was why I was beginning to wonder if some of the ideas coming from down south might not turn out to be rather better? It's certainly difficult to get all misty-eyed about local government if you live in this part of the world, I can tell you - so maybe schools being released from council control might not be such a bad idea?

I don't know but the problem with autonomy from local control is that it leaves the institution with nothing standing between it and central government - and the latter is at least as capable of being as stupid, capricious and belligerent as councils, which brings us to some of Michael Gove's remarks over the last week or so.

First he suggested that schools have 'tough targets' for GCSE passes imposed on them. Those failing to reach this new hurdle will face regime-change. Even one of Gove's most uncritical groupies has argued that this is arbitrary and unfair.

Then more recently he has suggested, at the most inappropriate time imaginable, that standards at the exam board aren't good enough.

Now, I have no idea whether exams in England are getting easier or not but that Gove can't see the obvious contradiction between these two positions is profoundly depressing. We can identify schools as 'under-performing' by the proportion of their intake who pass GCSEs, says Gove. However, if they improve on this record, we already know he would take this as evidence that examination standards have fallen because 'rigorous' exams can be identified by the proportion that fail them.

Here the attitude of Gove towards standards in schools is typical of the general Tory view, which in turn very much like their attitude to crime. Academic standards are falling and crime is rising - and whenever some objective statistical measure suggests this might not always be the case, the veracity of the measures themselves are called into question because what we are dealing with here are positions that are articles of faith rather than observations of how the world actually is.
Posted by Shuggy at 3:42 PM

On Rambo movies for Guardian readers 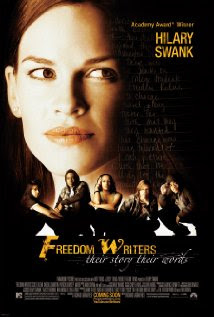 I was watching another in this genre, this time with Hillary Swank in Freedom Riders.

You may not have seen it but you know the script: naive but enthusiastic teacher takes on a job in grim inner-city gang-ridden hell-hole and wins her charges over with the power of commitment and the ability to see their true potential. Meets the usual resistance from cynical establishment. 'Based on a true story', yet almost completely unbelievable. You know the sort of thing.

Now I've discussed this before but neglected to mention an absolutely crucial ingredient to this genre: ever noticed these teachers only ever seem to have one class?
Posted by Shuggy at 7:56 PM

University fees and the celebrity premium

For a university education, it is being suggested that it should be 100% more than those English universities who choose to go for the maximum possible under this government's new tuition fee regime.

I don't have too much to say about this except to point to one or two rather good pieces elsewhere in the blogosphere.

"MOST reviewers considered ‘The Expendables’ to be a pretty mediocre film, as action flicks go. But there was no arguing with the box office pulling power of a cast that included Sylvester Stallone, Bruce Willis, Arnold Schwarzenegger, Dolph Lundgren and Mickey Rourke.

I detect something of the same thinking at work when I read the names of the academic rock stars lined up to teach at the New College of the Humanities, which opens up in London next year. Students will benefit from one to one tutorials from the likes of AC Grayling, Richard Dawkins, Steven Pinker and Niall Ferguson.

Short of raising Ludwig Wittgenstein and Bertrand Russell back from the dead, it is hard to imagine how the founders could have assembled a more bunch of profs more attractive to a target demographic of extremely bright rich kids."

A small point of disagreement, though. Rich kids this project may appeal to. By definition, it can only appeal to rich kids - but could we really describe them as bright? (Or 'Brights', in Dawkins' deeply cringe-inducing epithet.) I take leave to doubt it, which brings me to Paul's comments on the subject:

"Big famous names are not the same as good, serious educators of university minds. If you go to TDU thinking you’ll get a good education just because some famous people are there, you’re a fool. "

A fool and his money are soon parted, indeed. But to strike an optimistic note, I'm wondering if it might turn out that there aren't so many of these as one might suppose. My father was an educational academic and used to talk contemptuously of private schools that were 'schools for thick rich-kids'. Now, the experience - in Scotland anyway - is that these schools have struggled to survive, many having suffered death by amalgamation. I'm wondering if the fate of this enterprise might not turn out to be something similar? They may find that there are simply not enough thick rich kids to go around? If I'm wrong, it would be a profoundly depressing development - this X-Factor meets academia.
Posted by Shuggy at 12:24 AM