Some thoughts on N30

I doubt whether I've anything to say to this matter that hasn't been dealt with by others rather better and more comprehensively than I could but I'm finding the remorseless repetition of what have already become rightwing cliches has created an itch that demands to be scratched. Here's some of them in no particular order:

1) Low turnouts being used as a reason to cast doubt on the legitimacy of strike action and as an invitation to threaten more anti-union legislation.

The conclusion we can draw about people not voting is that they didn't vote and nothing else, since the procedure affords no opportunity to record why they didn't vote. I would have thought the reasons why politicians should refrain from going beyond this and casting themselves as the interpreters of the will of the silent would be obvious, but apparently not. All one can say is that if they insist that low turnout undermines the credibility of ballots, any rule that they propose to enact to remedy this should be applied consistently. Would any MEPs retain their seats if this were done, I'm wondering?

2) The strikes will cause disruption.

Um, well, yeah - that's generally the point of strikes. Next...

3) Day after dreary day we get some hack arguing that private sector workers would love to get pensions like wot we do in the public sector so why should they fund ours out of their taxes?

That it is often beeb jounos posing this question would tend to indicate that irony has taken a holiday from Auntie. I'm sure it's true that a lot of private sector workers would indeed love a pension scheme like ours. Yet amazingly they still continue to work in the private sector. While there are obviously a host of likely reasons for this, some of them presumably have to do with the fact that there are benefits to this that are absent in the public sector. A number of possible reasons suggest themselves but one might be that the relative stability and security of public sector work is traded off against higher rewards in terms of present income in the private sector?

Anyway, all this ignores the fact that the present arrangement forms part of a prior contract that the government is trying to shuffle out of. For the right it seems that the legal conventions of a contract shouldn't apply, if one of the parties in the agreement happens to be a trade union.

We've been down this road already with the tuition fees thing and it isn't a better argument now. If 'the country can't afford it' a sub-set of tax-payers can't afford it either. But the reality is that public sector pensions are declining as a proportion of GDP. I'm not really taking the deficit-reduction argument seriously anyway. No-one's suggested that once the 'structural deficit' has been eliminated, the original arrangement will be restored, are they?

Having said all this, I personally regret that my union along with all the others has focused narrowly on this issue. In my own case at least I wish they'd taken issue with the general package, which has to do with managers using the present situation to carry out a more general erosion of the wages and conditions of workers. In our case, this has been demonstrated in pay freezes for us (i.e. real wage cuts), nominal pay cuts for temp staff (i.e. real wage cuts with bells on), demands for useless rituals of presenteeism and the insistence that we should be 'flexible' and do tasks that we never stopped doing - as well as the raid on our pension schemes, which are just deferred wages, after all. It's for all of these reasons I'm going on strike on Wednesday. I appreciate many will disagree with this but I'm sure we can find some common ground...

Given that this claim is being made by the sort of people who routinely dismiss the public sector as 'unproductive', surely we can and must insist that they can't have it both ways?
Posted by Shuggy at 7:28 PM

Scots schools risk being left behind by other nations, teachers told

They were told this by Prof McCormac. The reason for this is photocopying. Elsewhere teachers are expected to do this whereas in Scotland the mere hint of the suggestion that we do our own is met with a demand to down tools.

Meanwhile, back in the real world can we agree that academics have to be amongst the most spaced-out people on the face of the planet? (As I'm sure I've said before, my late father was one of these so you may find something Freudian in this if you wish.)

I photocopied stuff today, btw. Stapled and on coloured paper and everything.
Posted by Shuggy at 12:07 AM

On the McCormac review

Apologies in advance because this is for a narrow audience. McCormac is a review into the pay and conditions of Scottish teachers and the reassertion of managerial control therein is, I would suggest, an added factor behind the now almost certain industrial action on the 30th of November.

That the aforementioned review should come up with proposals that, amongst other things, codify presenteeism and represent a deterioration in teachers' conditions of service shouldn't surprise anyone who's paid any attention to the make-up of the panel. It consisted of: one academic, one former head of HMIe, two Headteachers (one retired), one retired Herald hack, one chief executive from Edinburgh City Council, and one businesswomen/lawyer. Amazingly, the findings of the review were generally considered to be anti-teacher - who would have thunk?

But I wouldn't want to over-personalise the process; they're just channelling the Spirit of the Age, which is anti-public sector, anti-union, pro-employer, pro-management and therefore in favour of the mechanisms by which these demonstrate their power - hence the enthusiasm for presenteeism and 'flexibility'. This is the case even when the aforementioned advocates wear tartan, as is the case with Nationalist blogger Burdz Eye View who asks, "Am I missing something?":

"I am sure there are some nuances in the detail that pass this layperson by. But if that is the case, then be warned unions, for they will pass the average person, and indeed parent, in the street by as well.

So teachers will have to stay in school all day? Some of us will be surprised to learn they can and do leave. What, do they take themselves off to Starbucks when they have no contact time?!"

Space and the attention of the reader disallows an exhaustive list of what the 'Burd' is missing here so I'll restrict myself to a couple of points - the first relating to the above. The present relatively liberal arrangement is that when we are not teaching, we can work at a time and place of our own choosing. For example, while my present timetable doesn't actually allow me to leave early ever, if it did I could spend my time in Starbucks doing what I spent a fair chunk of Sunday doing, which was marking and reading about the Scottish Reformation. You'd think the Burd might be pleased I was brushing up on my Scottish history. But apparently it doesn't count unless I do this in a specified location at a specified time.

It doesn't count because teachers can't be trusted. Except if they're in management, of course. In this case, obviously they should be given more power. Hell, giving more power to Headteachers is like uniforms and religion: seems like all the hacks - amateur and professional - agree these are Good Things and that there should definitely be more of them in schools. I appreciate I'm only someone who actually works at the chalkface but I'm afraid I must demur. Take the following sentiment, for example (please):

"Do unions not trust headteachers to make the right judgement call?"

Don't be silly - of course we don't. Only someone who has had schools described to them could wonder why.
Posted by Shuggy at 11:59 PM

Yes we did. Hootsmon commentators speak they're branes:

"Teachers go too work after the traffic jambs are over, leave too go home before they begin, don't work week-ends, have great holidays and retire early on ill health...

From someone calling himself 'McNasty', who is apparently too McStoopid even to know what time school starts. And Pa Broon?

"I certainly won't be loosing any sleep over the teachers strike...

I blame the teachers, myself. 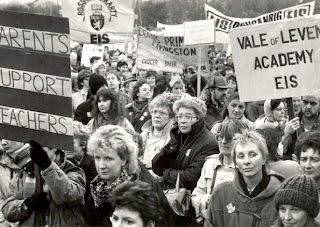 You don't really need a date for the last time teachers went on strike, do you?

"Exam scores keep going up yet educational attainment keeps going down. Not much of a system. Lets hope they strike for a long time so the educational system can be retooled."

Well, Alan Craige, you're certainly a tool - perhaps you might consider yourself a candidate?
Posted by Shuggy at 10:39 AM