It would appear that the latest damn mind losing certificate has to be issued to Rowan Williams for his frankly barmy suggestion that the incorporation of sharia law into British law is 'unavoidable'. I would have thought it was not only distinctly avoidable but pretty goddam unlikely. So unlikely, in fact, that you could file it under 'ain't got a snowball's chance in hell'.

It's not only an appallingly bad idea, the reasoning behind this latest contribution from the Bish belongs to a special category of lunacy. Consider the following, for example:

"Dr Rowan Williams told Radio 4's World at One that the UK has to "face up to the fact" that some of its citizens do not relate to the British legal system."

I mean, really! Relate? How exactly the fuck do you 'relate' to a legal system? You don't have to 'relate' to a legal system; it isn't like your goddam mother-in-law where you have to try and get along - just following the rules will do. Come to think of it, it isn't always strictly necessary or possible to relate to your mother-in-law - but I digress...

"He argues that Muslims find themselves "faced with the stark alternatives of cultural loyalty or state loyalty" and that Britain will only be able to come to terms with its multi-faith society if its legal system learns to adapt."

Do they? Which ones? I'm not sure they do. I can assure Bish that this 'stark alternative' is a figment of his fevered imagination and isn't really worth worrying about. Lemme give an example: we have laws regarding the consumption of alcohol in this country but banning it outright is something this government hasn't quite gotten around to yet. Are we seriously being asked to believe that because alcohol is haram for Muslims they're experiencing a huge conflict of 'loyalty' here? Aren't most of them simply not drinking it? There seems precious little evidence that they feel the need for a court to tell them not to drink it, as far as I can see.

This whole 'loyalty to the state' is a bit suspect anyway but the thing is, however you define it, I think most people would agree the state is nothing if not a legal order. It seems then a rather eccentric solution to 'integrating into the state' to effectively advocate the creation of an alternative one for Muslims.

"Dr Williams said an approach to law which simply said "there's one law for everybody and that's all there is to be said, and anything else that commands your loyalty or allegiance is completely irrelevant in the processes of the courts - I think that's a bit of a danger"."

One law for everybody. He makes it sound intolerant, even sinister, instead of what it is: the principle of equality before the law - this being a quaint notion that some of us think approximates most people's idea of justice and might just be worth holding on to. 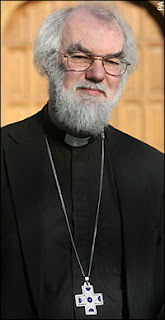 Bish: D'ya think he ever stops himself and thinks, "Hey wait a minute, I haven't a fucking clue what I'm talking about?" Neither do I. I think the reason for this is he's out of his fucking gourd.
Posted by Shuggy at 10:33 PM