Identity politics and other ways of wasting your time

I'm beginning to feel much more favourably towards Gordon Brown. This is largely a product - solely a product - of giving his opposition a quick scan.

For example, he's been getting stick for finding the time to write a book about Britishness. To be fair, writing this book does sound like a spectacular waste of time that is likely to produce something toe-curlingly awful as well as completely indigestible, if his previous musing on the subject are anything to go by. But it was not quite on these reasonable grounds that the SNP objected to it:

"A spokesman for Mr Salmond said: "For poor old Gordon Brown this may be too little, too late.

"His Britishness campaign has always been about him trying to sell himself to people south of the border, especially Middle England.

"What they want from the prime minister is a decisive government dealing with the economic crisis, not a floppy identity campaign.""

I had to re-read the last sentence a couple of times to check I wasn't hallucinating due to the lack of alcohol. Because this is pink elephant shit. For anyone who might be unaware, the people complaining about identity politics here are the same fucking people who are presently giving their attention to the weighty matter of painting saltires on the goddam trains. Because the problem with our trains isn't that they're shit and late and expensive - oh no, it's that they don't look Scottish enough.

Then there's David Miliband. Otherwise a fairly crappy post but Mary Dejevsky has a fair point when she asks where exactly the fuck has he gone then?

"It's a strange thing, isn't it? One week your foreign secretary is all over the media discussing everything under the sun – even grinning cheekily when collared by a television reporter - and the next week, when a full-blown international crisis erupts, he has vanished from the global map."

Or it might not be a fair enough point but who cares? That Miliband is an oily wee shite - I've taken an instant dislike to him. Plus there's the matter of his hair. What, exactly, is that weird helmet-like construction he has on his napper? I think it portends doom for Miliband's ambitions on the grounds that people with hair this strange rarely succeed in politics. Take Michael Portillo - someone Miliband resembles in more ways than one - he had deeply strange hair and look what happened to him.

Psephological research on the impact of weird hair in elections is still in its infancy but so far the the most plausible explanation to emerge is that potential electors see it as an issue of competence. For if someone can't get a grip on what's growing out of their fucking skulls, how can we trust them to run the country? It's a rhetorical question because clearly we can't. 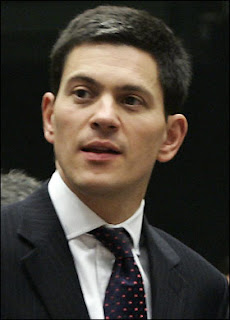 David Miliband: Owner of weird hair. It isn't just me who thinks so. In a recent ICM poll, 67% of those sampled answered in the affirmative to the question, "Do you agree that David Miliband's hair is fucking strange?" Furthermore, of these 39% indicated that this might influence their vote at the next general election.
Posted by Shuggy at 9:03 PM