The problem with working in these lunatic asylums that they're trying to pass off as places of learning is that you go a bit mental yourself. This has certainly been my own experience and evidence that I'm not alone is found in the alternately amusing and infuriating SchoolGate blog.

Like this story, for example, where a school loses its collective goddamn mind and suspends a pupil for taking the pill:

"In the school where the girl has been suspended for taking the pill, the Washington Post points out that "even carrying the pills in a backpack is counted among the most serious offences in the Student Responsibilities and Rights handbook." If the girl involved (an honour student), had been caught high on LSD, heroin or another illegal drug, she would have been suspended for five days. Taking her prescribed birth-control pill while at school meant she was subject to the same punishment as bringing in a gun. Isn't there a danger of losing sight of the real dangers here?"

I'd say - as obviously the real danger, as far as this whole thing is concerned, has to do with the little fuckers breeding. This they have no business doing. The girl in question should have been given a merit, prize, some kind of reward instead. It's for not taking contraceptives that pupils should be disciplined. Then sterilised.

And there was this post, where I learn that the movie Dead Poets' Society came top of a poll. Now, if the polling question had been, "What is the most excruciating film ever set in a school?" then I could understand. But it wasn't. It was, "What is the best film ever set in a school?" Inexplicably they came up with that ghastly Rambo movie for Guardian readers. Lost their goddamn minds if you ask me. "Seize the day" indeed! When watching it I feel more inclined to seize Robin Williams by the throat until he turns blue. Would you want anyone who doesn't feel homicidal urges towards Robin Williams teaching your children? No - neither would I.

Then, in the main education comment some Tory teacher is going about how we need to scrap national pay agreements in order to attract the 'best' to the profession:

"This is the argument the NUT should be putting forward: our children deserve better teachers and the only way they will get them is by improving pay and conditions for teachers."

Ah, now I have a controversial and what may seem to many a counter-intuitive suggestion: attract better teachers by offering shitter pay. Here's how it works. Personally I'd love to leave this lunatic job and do something more fulfilling - like working in a fast-food outlet. Problem is I can't afford to do so. But if teachers were paid the same as people working in fast-food outlets, then only those strange people who actually like teaching would remain in it. I once suggested this at a union meeting and was subsequently pelted with fruit.

Anyway, since a return to the catering sector is out and taking account of the fact that I have no marketable skills whatsoever, I thought instead of becoming a "leadership expert". I think I could easily come up with ideas that are at least as mental as those working for 'Future Leaders'. Take this suggestion, for example:

"Teachers should give children a ‘high five’ hand slap as they walk into the classroom each morning, leadership experts are telling the future heads of inner city schools. They claim this will motivate pupils and result in improved exam results. Quite what the children will make of their teacher trying to be cool is another matter.

The idea is the brainchild of Future Leaders, a training scheme for young teachers who show the potential to be fast-tracked into senior management positions."

Delete 'high-five' from that first sentence and I reckon they're onto a winner there. But as it stands I'm not sure 'brainchild' is the most appropriate term to describe this heart-breaking stupidity. Unless it's being used in the sense of, "After last night's curry, I sat on the toilet and dropped an enormous 'brainchild' into the bowl". But the word is seldom used this way...

'Future leaders' indeed! What kind of fucked-up future are they imagining, exactly? 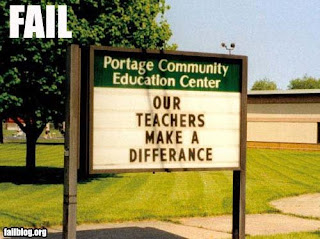