WikiLeaks and one from the archives 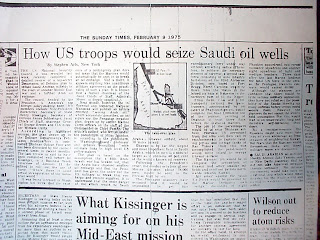 Like Paul I find myself changing my mind about all this. They are exactly the sort of documents that are of immense interest to the historian when the usual 30 year secrecy period has elapsed and some of the present ones being leaked out reminded me of the 2004 British government papers that revealed Nixon and Kissinger considered invading Saudi Arabia after the OPEC price hikes, which followed the Yom Kippur War.

Since they clearly thought better of it, I wondered what good would it have done for this to be known at the time? But as I was clicking around looking for links, I discovered that the Sunday Times had run with the story as early as 1975. This I did not know. I wouldn't know how much attention was given to the story at the time either, what with only being 9-years-old.

But perhaps with WikiLeaks we can say there is nothing new under the sun - it's just the sheer scale of the document dump that makes it different from previous leaks? Dunno - would be interested in your thoughts...
Posted by Shuggy at 11:56 AM