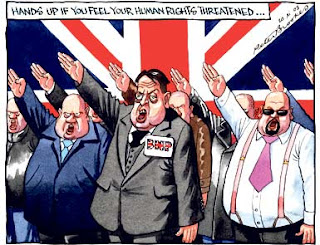 No links necessary; if you read blogs at all, you can't have failed to have noticed how everyone's enjoying the leaking of the BNP membership list. The BNP's response has been beyond parody, as the cartoon captures rather well.

But also hugely enjoyable has been the less dramatic discomfort inflicted on the Conservatives in England and the SNP in Scotland in the wake of the credit crunch. This is a bit rushed and I'll return to this topic in more detail later - just a couple of thoughts for now...

You might wonder why Gordon Brown's popularity has recovered, given that as Chancellor for ten years, he might be thought of as being a teensy-weensy bit responsible for everything that has happened. I'm thinking at least part of the answer is fairly straightforward. Opposition parties wheel out a number of alternative policies and make various criticisms of the incumbents but underpinning them all is usually one basic message: they present themselves as an alternative by saying, in effect, that this wouldn't be happening if we'd been in power.

I've particularly enjoyed Alex Salmond's discomfort. The SNP are the quintessential one message party. It is the same message preached by nationalists everywhere - that all the trouble in the world could be avoided if only we were independent. Does anyone believe this anymore - even in the SNP?

We don't have to take on board the cruder rhetoric coming out of the Scottish Labour party to demonstrate this - we only have to follow through the logic of what Salmond himself says. For example, when he says that being part of a larger economic unit does not insulate countries from the banking crisis, he is perfectly correct. But does he not understand that people will also see that being part of a smaller unit simply does not do for a country what he and his party have been claiming for it? Perhaps he thinks we're stupid? I hope so because it's this kind of lazy arrogance - part of Salmond's DNA, I would argue - that will be his undoing.

Then there's the Cameroons. Another essentially one message party - make the state smaller - confronted with a dwindling audience. And no wonder. It goes without saying that they cannot with any credibility claim the present crisis wouldn't have happened under their stewardship. But their response has been a disaster too. I think this is behind their present woes. It's not so much that Gordon Brown has played a blinder - it's that the Conservatives have lost confidence in their central message. Or perhaps they're simply confused. I would have thought the line they should take in the present difficulties would be obvious: support fiscal expansion through tax cuts in an effort to stave off deflation, then argue that spending should be cut in the future in order to pay for it. That would make tax-cuts 'permanent', would it not? Instead we get some drivel about National Insurance holidays for employers as an incentive to retain or recruit further workers.

The tax-cutting party has failed to advocate tax-cuts at exactly the time when they would be appropriate. The depth and scope of their failure is impressive, I'm thinking. No wonder their poll lead has dropped to only three points. Long may it continue. It should, and for good reason. Consider exactly how crap the Tories have been here. We face the prospect of a sharp economic contraction under Brown's stewardship. Furthermore, it is by no means certain that any measures the government has taken or plans to take will actually do much to avert recession or even avoid outright deflation. One of the things that concerns me about the new enthusiasm for 'Keynesianism' is that I don't think many people realise that economic history does not tend to support the thesis that recession can be avoided simply by pulling a few fiscal and monetary levers. But economic history does have plenty of cases where matters have been made worse by either pulling the levers the wrong way and/or opting to do nothing at all. This is the position the Tories find themselves in, I think.

The Tories are often said to have lost their reputation for economic competence when the pound fell out of the ERM. Labour benefited, despite the fact that they had advocated exactly the same policy. Part of the benefit of being in opposition, the conventional wisdom would hold because people notice the failings of the government more acutely than the opposition. That this benefit has failed to materialise for the Tories in the present circumstances is testimony, not so much to how well the government has handled this, but just how badly Cameron and his new model Tories have conducted themselves.
Posted by Shuggy at 12:23 AM