I can't be alone in thinking evolution has taken a weird turn on one or two occasions? Colosseum TV brings us news that "celebrities" - i.e. those people in our society who are celebrated - are competing with each other in a new way. The winner is whoever shows themselves most willing to eat weird shit. For this sort of highbrow analysis of the human condition one naturally turns to the highbrow journal that is the Torygraph:

The final dish was a blind course, both celebrities had to pick from a "whatever's on the stick" or "whatever's in the tub".

Swash chose the stick and was presented with parts of a crocodile's genitalia. McLean followed suit, then finished off with a kangaroo testicle, winning the trial.

The victorious model was later collared by fellow contestant, television presenter Esther Rantzen, back in the camp, who told her: "I want to know about this crocodile ball bag."

McLean replied: "It's so bad, it was so tough. I asked (Ant and Dec) whether the (crocodile) ball bag was full of semen and it is so I swallowed crocodile semen... I asked if I could get pregnant."

We have to be careful not to conflate things here - there's being merely stupid, and then there's losing your damn mind. This case illustrates the distinction rather well, I feel. Thinking that eating a crocodile's ball bag might make you pregnant is the former. But if you think this is a possibility, yet you go ahead - presumably calculating that the potential benefit of being more famous outweighs the risk of giving birth to baby crocodiles, I think we can and must say that you have strayed quite decisively into the damn mind losing territory. 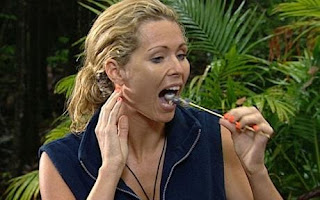 Nicola McLean: I'd have a caption competition were it not for the fact that I suspect there's probably too many of you out there whose minds work like mine.
Posted by Shuggy at 9:54 PM