"The growing expectation placed on schools and parents to boost pupils' self-esteem is breeding a generation of narcissists, an expert has warned.

Dr Carol Craig said children were being over-praised and were developing an "all about me" mentality. "

Change that to 'have developed' and I don't think you'll find many teachers who would disagree. Carol's my new friend, I've decided. I was a little sceptical at first when I learned she heads the Centre for Confidence and Well-being but when I read further, I see that this is proper well-being based on the need for more press-ups and such like. She has a blog - and here's some notes expanding on what she said on Saturday. I'll do something serious on it in due course but right now I'm too knackered.

Speaking of ego-centric adolescents, some teachers are walking out in protest at one of their comrades who valiantly refused to stop wearing trainers on the job and was sacked as a result:

He also worked with children with disabilities and helped 96% of his GCSE students achieve grades A to C in Maths.

But the 56-year-old was fired in December after refusing to follow an unofficial dress code imposed by an acting head teacher three months earlier.

Mr Swain argued his clothing was irrelevant to his teaching ability and said staff had not been consulted over the "inconsistent" dress code."

Don't get me wrong, sacking the dude is totally over the top but for fuck sake, get a grip of yourself man. Would it kill you to wear a shirt and a proper pair of goddamn shoes and maybe a pair of decent trousers? How you dress is indeed irrelevant to your teaching ability but it isn't all about you. My own view is that by dressing a certain way, you create professional distance from your charges and send a message - the most important being: I'm not your pal so don't you fucking speak to me as if I was. I feel it is important to get this across. This is why I always take my classes wearing combat fatigues and a full-face balaclava. 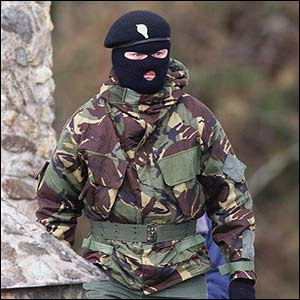 What the fashion-conscious yet politically-minded teacher in North Lanarkshire is wearing this season.
Posted by Shuggy at 11:00 PM