We come 8th in the world for alcohol consumption - behind, amongst others, Germany and Ireland.

Given that drinking happens to be my hobby as well as our national sport, I think this is an appalling performance that we must improve upon.

The SNP take the opposite view and are intent on introducing measures to curtail our consumption.

It's not clear whether their plans to impose minimum prices are even legal.

If not, this would form part of a pattern set by the SNP; proposing crap ideas that never get off the ground because they clash with European or UK law. This was the case with their 'local income tax' - which wasn't local at all, given that they intended a uniform rate to be set throughout the whole country. This they intended to collect through the Inland Revenue. The trouble was this was outside the competence of the Scottish Parliament, what with revenue collection being a reserved matter. But apart from not being as described and impossible to collect, it was an excellent idea.

Anyway, if passed we are informed this would, for example, raise the price of an average bottle of blended whisky to £11.20 - raising the prospect that Carlisle will become the new Calais as Scots head south of the border to stock up on cheaper booze.

I have to say it takes a special kind of chutzpah to spend your entire political career complaining that Scots aren't getting a fair deal and then propose to make them pay more than anyone else for one of their own country's most successful products. 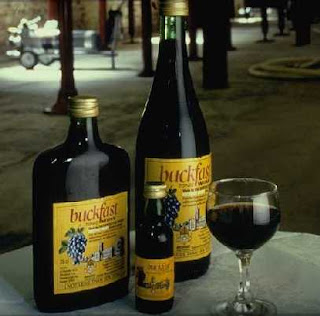 This post was powered by Buckfast - a charming vintage which I'm happy to say will be unaffected by the Scottish Government's proposals.
Posted by Shuggy at 9:09 PM