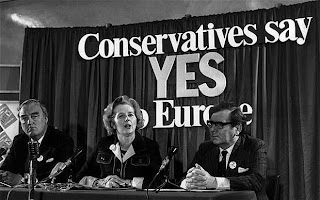 I had a much longer and even more boring post in the pipeline but I realised I'd lost the plot when I found myself writing a sentence about how difficult it was to disaggregate the contribution the EU had made to the expansion of world and European trade since 1945 from the general reduction in world tariffs.

Instead, I'll restrict myself to a few observations. The original post was asking whether a too vivid memory of history wasn't something of a problem in the European debate and to what extent this contributes to the hyperbole that we see when it comes to the EU?

The misnamed 'Eurosceptics', for example, rather give the impression that the outcome of the Second World War is in some way undecided, hence the ludicrous comparison of a pre-veto wielding Prime Minister to Neville Chamberlain, made in a popular tabloid newspaper that I won't link to.

But the ghosts of history haunt the Germans, the French and the east Europeans too - all of whom respond to the past in a way that prefers containment, rather than 'splendid isolation', as a way of burying a European past characterised by conflict interrupted by economic depression.

For the Germans it is the Weimar hyper-inflation that keep them awake at night. This is the only conclusion one can draw from their reluctance to allow the ECB to carry the debt of Eurozone members. It's understandable, but I think it was Chris Dillow who said, in his day job, that there's not a lot of point in taking steps to preserve the value of a currency if it means that the currency ceases to exist.

As a number of people have pointed out, it was not hyper-inflation but rather deflation and unemployment that provided the economic backdrop for the capture of the German state by the Nazis. But here the ghosts of the Great Depression are being evoked in an inappropriate way. It is the crudest form of reductionism to attribute the rise of fascism to this. Moreover, there are reasons to think that while one could argue some of the mistakes of the thirties are being repeated, rather more lessons have been learned than one would gather from reading some of the more apocalyptic commentary. These are as follows:

1) The Great Depression was characterised by both fiscal and monetary tightening. No-one thinks we have the latter now - but also the former has been more relaxed than it was during the thirties.

2) The 'outlawing Keynesianism' aspect of the proposed and misnamed 'fiscal union' isn't good in my view but there's two reasons to think it might not be as bad as supposed: a) We've been here before: it looks pretty much like son of Stability Pact to me - and if it's anything like that the European powers will simply ignore it if they deem this to be necessary, b) It might pave the way for the ECB to step up to the plate and issue Euro-bonds. I agree this looks unlikely just now but on the other hand, one shouldn't underestimate the political capital invested in the Euro project (see 'historical ghosts' above).

3) The American economy appears to be growing at a surprising rate. No student of the interwar period would underestimate the role that American contraction played in those circumstances. Nor their response to it, which brings me to the final point...

4) Protectionism: as far as one can gather, there has been no tendency for this to be seen as a solution or even a damage-limitation exercise in the way it was in the interwar period.

This last point should underline the importance of the survival of the Euro. For what's the alternative? For the Greeks to say, "Ok, we'll pay our debts - in drachma, if that's ok with you?" And then what? A Europe of competitive devaluations, which is protection by another name but with the same consequences. It is for this reason that while I was never a fan, I hope the Euro survives. On the UK stance, one is inclined to say that if Cameron is sincere in his professed belief that its survival is in our interests, he has a rather eccentric way of showing it.

Finally, on a parochial point, if David Cameron has an interest in the survival of the Treaty of Union, the same verdict applies. The SNP's 'independence in Europe' was looking a little threadbare in the wake of the Euro crisis. His behaviour in Europe has given it a new lease of life.
Posted by Shuggy at 4:26 PM