"The government is to review whether "core British values" should become a compulsory part of the curriculum for 11 to 16-year-olds in England.

In response to last year's London bombings, ministers want to adapt the current citizenship classes in an attempt to make society more unified."

Hmph - doesn't the fact that 'British' values are only going to be taught in English schools rather illustrate the problem with this sort of thing? I think I'm probably in a minority up here but I feel myself to be both Scottish and British and don't particularly care for this idea that one's identity is some kind of zero-sum game - as is implicit in these stupid opinion polls that ask you if you feel more Scottish rather than British. I mean, what are you supposed to say - I feel 13% more Scottish today, thank you for asking?

Apart from anything else, part of my own notion of Britishness is that we're not like the French or the Americans: it is perhaps regrettable that we missed the window for an Enlightenment revolution in the 18th century but we did so we obviously can't by definition do bombastic republican pride like they do and it would be frankly embarrassing for us to ape this. What could be more British than to say for us, "it's just not the done thing"?

Also the justification behind it - the idea that this will go some way to preventing the radicalisation of Muslim youth - sounds to me like yet another social problem that education will be expected to cure. We already carry the burden of enough problems we're powerless to solve, thank you very much.

There's also the problem of what everyone will be expected to agree on. Allow me to illustrate with a trivial example: it is supposed to be indicative of 'anti-English racism' that many Scots will support any team against England, so to demonstrate we don't all have large (cooked in animal fat and garnished with deep-fried Mars bar) chips on our shoulders, we're supposed to cheer on Ingerland in the World Cup. (This is what Gordy plans to do, after all.)

Well, I'm sorry - I reckon this is just Tebbit's "cricket test" warmed up for a new generation and I'm not doing it. Being half-Scottish, quarter English and quarter Welsh, I'm the very incarnation of the union. Most of my living relatives are English. My mother's English, for goodness sake. You'd be hard-pressed to find a less anti-English Scot than me.

But if you're English and reading this - I hope you get humped severely in the World Cup. There's a simple explanation. I'd be happy for you to win if I thought there was the least possibility of you doing so gracefully - but there really isn't. If you win anything - be it a war or football - you go on and on and fucking on about it, like, forever. You won the World Cup in 1966 and have been banging on about it ever since. I was born in 1966 - so there has never been a point in my life when I haven't ran the risk of some English twat going on about winning the World Cup - as if it was their doing or something. Should you win this time, I would have to resign myself to the fact that in all probability not only would my entire existence on this earth will be dominated by this shit - it would continue long after I'm dead and buried. And this simply won't do.

So I deeply and sincerely hope you reach the final. 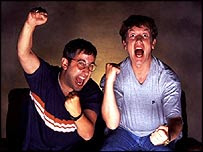