Tommy Sheridan has mooted the possibility that MI5 have joined the global conspiracy against him, claiming that a dastardly alliance of the SSP executive committee, the evil Murdoch empire, and the best man at his wedding have fabricated a video tape in order to "overthrow his crusade for an independent socialist Scotland.":

""I said I was the victim of the mother of all stitch-ups," he said. "I don't think there is anyone in Scotland who can doubt that this has been an attempted stitch-up from day one.""

Indeed not. Because an independent socialist Scotland is very likely to happen soon. You could say it's imminent. Tommy Sheridan went on to compare himself to another victim of a tabloid character assassination:

"Just as Freddie Starr did not eat his hamster, then the video has been concocted, manufactured and presented."

You can see how seamless is the web of deceit that the Murdoch press has spun. First Freddie Starr, now Tommy Sheridan. Your granny could be next. No-one is safe.

Vote Solidarity, by the way. 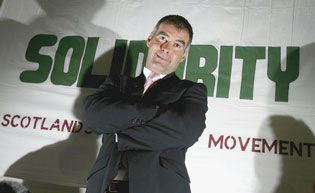