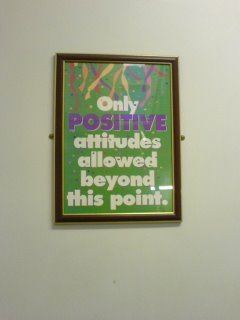 Sorry for light posting - been goddam busy actually working, which doesn't agree with me at all. I'm in a real tick the boxes department here, within a tick the boxes school.

They are so keen on ticking boxes that they invent boxes for you to tick that you are not contractually obliged to tick. It's at times like these I don't recognise my own species. Why would you do that, why? More importantly, why are they doing it to me?

Here's a photo of the notice that confronts me every bloody morning when I go to pick up my register. It was probably against the law or something to take this but I thought I should give you the flavour. If I turned around and went home, what sane person would blame me?

Anyway, elsewhere people have been busy. Harry's giving up smoking and is asking for advice. Mine is do it, don't do it - but don't turn into one of these born-again anti-smokers who smile smugly and dispense advice replete with their own giving up the evil weed experiences. "I found I can taste my food so much better..." Bully for you. Now fuck off.

Elsewhere, Chris Dillow reads books (Gordon Brown's, for heaven's sake) so you don't have to. He suggests that since Gordy assumes without argument that it is the role of government to make the country an enterprise association, he is the sort of person that reads merely to reinforce his own prejudices. Clever chap. Chris, that is.

Will has news that Trot factionalism is bad for job security.

And here's a tabloid story that made me laugh:

"Federline will be revealing everything about his short marriage in court, including Britney’s lesbian fantasies, as the couple battle over custody of their two sons Sean Preston and Jayden James.

An insider told the Sun: "Britney has told him more than once she is sexually attracted to women and men equally.

The Sun said she begged. Several times. But we are to take it he declined.

Apparently he's expecting a court of law to believe this. Which is nothing if not ambitious, to say no more than that.
Posted by Shuggy at 11:00 PM