John 'mad dog' Reid has been losing the plot in his attempt to 'deliver the killer blow' to the nationalists at Labour's Oban conference with some arguments that are surreal as they are nasty:

"Breaking up the Union would leave Scotland vulnerable to terrorist attack and a flood of illegal immigrants, John Reid, the Home Secretary, said yesterday in Labour's most scathing attack yet on the SNP."

'Scathing' it may be - but it also doesn't make any goddam sense. Illegal immigrants, we are told, are economic migrants coming into Britain under false pretences. But we don't get very many up here now, so why would an independent Scotland receive more, when we are also being told separation would completely wreck our economy? Not just a bit fucked, totally fucked - according to Gordon Brown, Douglas/Wendy Alexander*, and now John Reid - plagues of locusts, the whole shabbang. Since we can rule out the weather as a 'pull factor', wouldn't this deprive them of any reason for wanting to come to Scotland? Ah, but duplicitous Johnny Foreigner will still want to come and blow stuff up, fucked economy notwithstanding, reckons John Reid. His reasoning behind this is so mental I can't even bring myself to discuss it.

The he blamed the SNP for "allowing the Tories to get into office for the last twenty years". Two years longer than they were actually in power? That's a fairly damning indictment. I mean, I'm opposed as much as any Unionist to blaming the English for everything. But Thatcher? The voting statistics show they really need to take the rap for that one, surely?

Then it got really scary:

"[R]eferring to his widely anticipated leadership bid against Gordon Brown, Mr Reid joked: "Almost one million of us Scots live and work in England - in all walks of life, up to and including the Prime Minister. And I am told the next Prime Minister might be a Scot as well."

Later, Mr Reid was given the opportunity to rule himself out of the fight for the leadership, but once again refused to do so."

As politician's jokes go, this one's even more unfunny than usual. 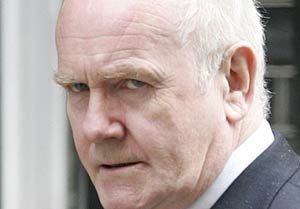 John Reid: Has brains, is dangerous - on account of the fact that he's done gone lost his goddam mind and he's from Lanarkshire.

*I revealed in a ground-breaking previous post that Wendy and Douglas Alexander are in fact the same person.
Posted by Shuggy at 10:20 PM