Further to the post below, there's an extraordinary poll in the Telegraph that shows a higher proportion of English voters than Scots want Scottish independence:

"A clear majority of people in both England and Scotland are in favour of full independence for Scotland, an ICM opinion poll for The Sunday Telegraph has found. Independence is backed by 52 per cent of Scots while an astonishing 59 per cent of English voters want Scotland to go it alone."

And Labour aren't helping with these odd arguments they are using. Mixed in with the usual distressing appeals to be 'modern' and 'globalisation' and stuff are things that just ain't true. For example, in Oban Gordon Brown said:

"We should never let the Nationalists deceive people into believing that you can break up the United Kingdom."

What a strange thing to say. Brown and the rest of them are making these arguments now precisely because it is possible to break up the UK.

"Scottish Secretary Douglas Alexander will close Labour's conference in Oban with another attack on the SNP.

Eh? Typical New Labour: something is undesirable if it is 'counter to global political trends'. But it isn't even that. Weren't they paying attention to what happened to Yugoslavia? Or more gently in Czechoslovakia? Arguably globalisation makes this sort of thing more likely as people cleave to local loyalties in the face of impersonal economic forces.

Would it kill them to say something like, "The break-up of the UK is perfectly possible, it wouldn't necessarily be a disaster for the Scottish economy - nevertheless we don't think it would be a good idea"?

Then they could offer to put John Reid back in his cage, or something. 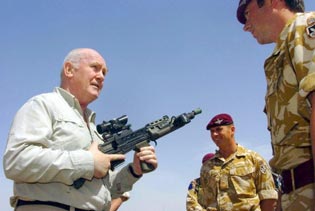