"Alex Salmond announced last night that the SNP was now working on preparations to go it alone at Holyrood as a minority administration, with limited support from the Greens.

He emerged from coalition talks with the two Green MSPs, Robin Harper and Patrick Harvie, full of praise for the constructive way the meeting had gone.

Negotiations will resume today but any deal is likely to fall short of a full coalition with the Greens, who prefer a looser form of support known as "confidence and supply"."

Some people claim wisdom comes with age. I, on the other hand, refute this from my own experience: the older I get, the less I understand. This, for example. What difference does it make if the SNP and the Greens go into formal coalition or call their arrangement 'confidence and supply' or whatever? Why even waste the energy giving the agreement a name when even the most heavily-welded one could only constitute 49 votes in a Parliament of 129 members? What, in short, is the fucking point? Arithmetic was never my strongest suit but 49's less than half of 129, isn't it? Or am I missing something? 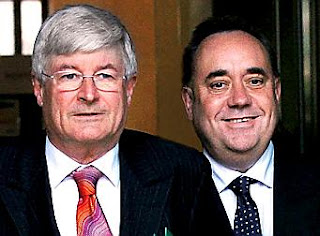 Talks between Alex Salmond and Robin Harper broke down when both of them realised the time spent talking about a coalition were hours of their lives they wouldn't get back.
Posted by Shuggy at 11:21 PM